The cultural action group participated in a study trip 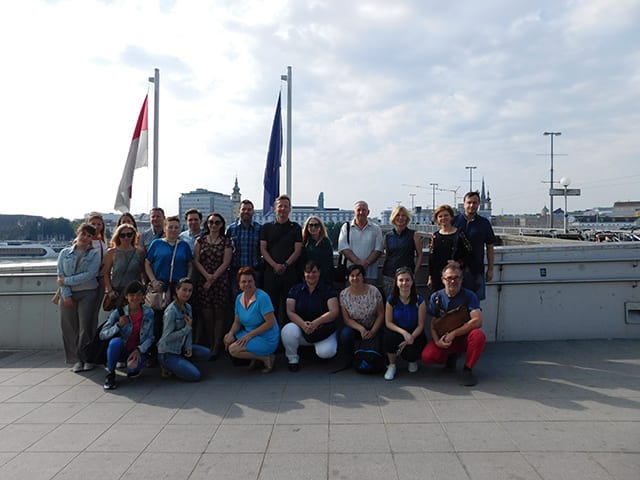 As a part of the Cultacross project (SKHU1601/1.1/041) and in the organization of Arrabona EGTC, the members of the Cultural Action Group created within the project participated in a study trip on 28-30 May 2018. The primary destination of the trip was the city of Linz, the capital of the State of Upper Austria in Austria, and during the last two days, the participants visited Český Krumlov in the Czech Republic. The most important goal of the study trip was to collect good practices and experiences from Austria and the Czech Republic, and to use them as an opportunity to develop and promote the long-term cultural cooperation between Győr and Dunajská Streda. Among other things, the KACS chose Linz, former Cultural Capital of Europe, and Český Krumlov, near the Austrian-Czech border, because their characteristics are very similar to the characteristics of the cities participating in the project near the Hungarian-Slovakian border.

The primary focus of the professional programme was to inspect the most important cultural and visitor attractions and to understand their experiences; the participants were able to discuss deeper professional matters with the representatives and leaders of the organization, exceeding the scope of a simple visit. The visited locations were as follows:

Ars Electronica Center: started as a festival, the institution for the research of the effect of the newest results of digital technology on people became one of the leading research institutions of the world, organized in 1979 – with opened exhibition halls. The professionally-dedicated Andreas Bauer, who led the group with great excitement, told us that 60% of their budget comes from income from services; the remaining part is covered by the budget of the State of Upper Austria and projects of the European Union.

The presentation by Georg Steiner, director of Tourist Information Linz, provided the group with information on the fact that Linz, located exactly halfway between Vienna and Salzburg and one and a half hours from each of these cultural “giants”, was only known as an industrial city with bad quality of air. Its image-change only came about with the appearance of the clean technologies that replaced the steel industry, and was driven by the engine of innovation and culture. If presenting a shining past would represent the attractiveness of a city itself, Linz would never be able to compete with Vienna, or even with Salzburg.

Schlossmuseum is a typical example of elegant mixtures of traditional environments and contemporary novelties. The museum, having an incredible collection, operated by the State, and presenting the cultural-social-natural heritage at a very high level, currently has no director, because the new government of Austria has initiated the creation of a strategy covering each museum. The essence of this measure is that the management of the collections must be performed in a focused manner in the future, and the operation of it must be also reorganized accordingly. It was interesting to see how they intend to complete the new challenges.

The presentation by the leader of Brucknerhaus responsible for organizing events revealed that the compelling concert hall of the institution has been constructed in a functional Scandinavian style representing high quality and the taste of the 70’s, and it also has an own symphony orchestra. While placing an emphasis on the bond between Anton Bruckner and the city, the construction has been initiated by the Bruckner Association, now funded by the city and the region. In addition to the concert hall for 1300 persons, the smaller event rooms for 400 persons are operated with an occupancy rate of app. 80% with app. 200 events per year.

After getting to know the experiences of the participants, the study trip and the experiences acquired there may be summarized by the following thoughts, to use them in connection with Dunajská Streda and Győr: being open, professional, diverse, and innovative, the significance of the meeting of old and new, which are significantly represented in the cultural and touristic conception of the city.

You can find out more about which cookies we are using or switch them off in settings.

This website uses cookies so that we can provide you with the best user experience possible. Cookie information is stored in your browser and performs functions such as recognising you when you return to our website and helping our team to understand which sections of the website you find most interesting and useful.

Strictly Necessary Cookie should be enabled at all times so that we can save your preferences for cookie settings.

If you disable this cookie, we will not be able to save your preferences. This means that every time you visit this website you will need to enable or disable cookies again.